Jesus heals on the Sabbath

1 Another time Jesus went into the synagogue, and a man with a shrivelled hand was there. 2 Some of them were looking for a reason to accuse Jesus, so they watched him closely to see if he would heal him on the Sabbath. 3 Jesus said to the man with the shrivelled hand, ‘Stand up in front of everyone.’

4 Then Jesus asked them, ‘Which is lawful on the Sabbath: to do good or to do evil, to save life or to kill?’ But they remained silent.

5 He looked around at them in anger and, deeply distressed at their stubborn hearts, said to the man, ‘Stretch out your hand.’ He stretched it out, and his hand was completely restored. 6 Then the Pharisees went out and began to plot with the Herodians how they might kill Jesus.

7 Jesus withdrew with his disciples to the lake, and a large crowd from Galilee followed. 8 When they heard all he was doing, many people came to him from Judea, Jerusalem, Idumea, and the regions across the Jordan and around Tyre and Sidon. 9 Because of the crowd he told his disciples to have a small boat ready for him, to keep the people from crowding him. 10 For he had healed many, so that those with diseases were pushing forward to touch him. 11 Whenever the impure spirits saw him, they fell down before him and cried out, ‘You are the Son of God.’ 12 But he gave them strict orders not to tell others about him.

13 Jesus went up on a mountainside and called to him those he wanted, and they came to him. 14 He appointed twelve that they might be with him and that he might send them out to preach 15 and to have authority to drive out demons. 16 These are the twelve he appointed: Simon (to whom he gave the name Peter); 17 James son of Zebedee and his brother John (to them he gave the name Boanerges, which means ‘sons of thunder’), 18 Andrew, Philip, Bartholomew, Matthew, Thomas, James son of Alphaeus, Thaddaeus, Simon the Zealot 19 and Judas Iscariot, who betrayed him. 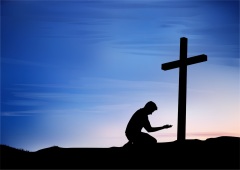 But something wonderful is revealed through this event. Jesus said to the Pharisees: ‘Which is lawful on the Sabbath: to do good or to do evil, to save life or to kill?’ But they remained silent’ (v. 4). The sabbath – the day enshrined in the law and set aside for rest – was it to be used for good or evil? It seems a simple question, but the Pharisees were unable to answer – how far they had drifted from the Lord! But Jesus answers for them by healing the man (v. 5). The sabbath is for rest – rest in Jesus. The man had firstly come to the place of worship, secondly he had come on the holy day, and thirdly he had come to the Son of God himself – and Jesus had healed him. It seems to make sense, doesn’t it?

Of course we can come before Jesus at any time and in any place – but there is also something special and intentional about coming to the place of worship with our church family, on a Sunday, and asking Jesus to heal us spiritually, emotionally, physically. Sunday is a day of rest, as the Pharisees rightly point out – but it is rest in Jesus that we seek – and to experience his healing hand.

Question: Sunday is the day referred to as the sabbath. How do you spend your sabbath? Do you seek to rest in Jesus?