‘“I will strike the shepherd,  and the sheep will be scattered.” [Zecheriah 13:7]

28 But after I have risen, I will go ahead of you into Galilee.’

30 ‘Truly I tell you,’ Jesus answered, ‘today – yes, tonight – before the cock crows twice you yourself will disown me three times.’

31 But Peter insisted emphatically, ‘Even if I have to die with you, I will never disown you.’ And all the others said the same.

32 They went to a place called Gethsemane, and Jesus said to his disciples, ‘Sit here while I pray.’ 33 He took Peter, James and John along with him, and he began to be deeply distressed and troubled. 34 ‘My soul is overwhelmed with sorrow to the point of death,’ he said to them. ‘Stay here and keep watch.’

35 Going a little farther, he fell to the ground and prayed that if possible the hour might pass from him. 36‘Abba, Father,’ he said, ‘everything is possible for you. Take this cup from me. Yet not what I will, but what you will.’

37 Then he returned to his disciples and found them sleeping. ‘Simon,’ he said to Peter, ‘are you asleep? Couldn’t you keep watch for one hour? 38 Watch and pray so that you will not fall into temptation. The spirit is willing, but the flesh is weak.’

39 Once more he went away and prayed the same thing. 40 When he came back, he again found them sleeping, because their eyes were heavy. They did not know what to say to him.

41 Returning the third time, he said to them, ‘Are you still sleeping and resting? Enough! The hour has come. Look, the Son of Man is delivered into the hands of sinners. 42 Rise! Let us go! Here comes my betrayer!’

43 Just as he was speaking, Judas, one of the Twelve, appeared. With him was a crowd armed with swords and clubs, sent from the chief priests, the teachers of the law, and the elders.

44 Now the betrayer had arranged a signal with them: ‘The one I kiss is the man; arrest him and lead him away under guard.’ 45 Going at once to Jesus, Judas said, ‘Rabbi!’ and kissed him. 46 The men seized Jesus and arrested him. 47 Then one of those standing near drew his sword and struck the servant of the high priest, cutting off his ear.

48 ‘Am I leading a rebellion,’ said Jesus, ‘that you have come out with swords and clubs to capture me? 49 Every day I was with you, teaching in the temple courts, and you did not arrest me. But the Scriptures must be fulfilled.’ 50 Then everyone deserted him and fled.

51 A young man, wearing nothing but a linen garment, was following Jesus. When they seized him, 52 he fled naked, leaving his garment behind.

THE CUP OF JUDGEMENT

Mark reveals to us the intimate moment of Jesus – in Gethsemane – in conversation with his Father: ‘Abba, Father,’ he said, ‘everything is possible for you. Take this cup from me. Yet not what I will, but what you will’ (v. 36). As we saw earlier in the chapter, Jesus knows the fate that awaits him, and here we see the true burden of what Jesus is about to take on. Jesus asks his Father if there is any way for him not to go to the Cross – ‘take this cup from me,’ he says. The cup Jesus is referring to is the cup of judgement, or the cup of God’s wrath – often referred to in the Old Testament. Those who would drink from the cup, God’s wrath and judgement was upon (see Isaiah 51:17-23). Jesus knows that going to the Cross means that he will take on the sins of the world and bear the brunt of the Father’s wrath. 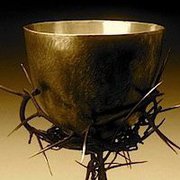 But notice, Jesus adds, ‘Yet not what I will, but what you will’. Jesus knows what going to the Cross means – he knows he is going to drink from the cup – yet his primary concern is that he does the will of his Father. Jesus is so devoted to the Father, so united with him, that he is willing to be obedient to death if it is the Father’s will.

From the outside, it might all seem rather cruel and brutal. Yet great beauty radiates out from Jesus’ journey to the Cross – the Eternal Son of God going to the Cross – taking on all the sin of the world – drinking from the cup – giving himself as a sacrifice and taking the punishment that we deserve. Beauty triumphs as we see that Jesus – God himself – is willing to give everything – he is willing to give himself – for us. This is the love of God.

Question: How does it make you feel to think of that Jesus knew the dreadful suffering that was approaching him? How does the fact that he was willing to do that for you make you feel about him?