Jonah’s anger at the Lord’s compassion

1 But to Jonah this seemed very wrong, and he became angry. 2 He prayed to the Lord, ‘Isn’t this what I said, Lord, when I was still at home? That is what I tried to forestall by fleeing to Tarshish. I knew that you are a gracious and compassionate God, slow to anger and abounding in love, a God who relents from sending calamity. 3 Now, Lord, take away my life, for it is better for me to die than to live.’

4 But the Lord replied, ‘Is it right for you to be angry?’

5 Jonah had gone out and sat down at a place east of the city. There he made himself a shelter, sat in its shade and waited to see what would happen to the city. 6 Then the Lord God provided a leafy plant and made it grow up over Jonah to give shade for his head to ease his discomfort, and Jonah was very happy about the plant. 7 But at dawn the next day God provided a worm, which chewed the plant so that it withered. 8 When the sun rose, God provided a scorching east wind, and the sun blazed on Jonah’s head so that he grew faint. He wanted to die, and said, ‘It would be better for me to die than to live.’

9 But God said to Jonah, ‘Is it right for you to be angry about the plant?’

10 But the Lord said, ‘You have been concerned about this plant, though you did not tend it or make it grow. It sprang up overnight and died overnight. 11 And should I not have concern for the great city of Nineveh, in which there are more than a hundred and twenty thousand people who cannot tell their right hand from their left – and also many animals?’

Jonah was angry because he could not understand the grace and compassion of the Lord (v. 1-2). How could the Lord save a city that had been so destitute? In this way Jonah was deciding fro himself what was right and just and not allowing the Lord to define those things. This is perhaps the same spirit that guided the Pharisees when they complained about Jesus eating with sinners – the least and the last. 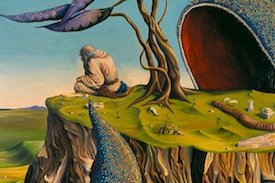 But we see here in Jonah just what Jesus showed us – the Kingdom of God is truly for anyone who turns to the Lord. There is no exception. Whether you have lived a life of drunken debauchery or a life of pious purity – turning to the Lord in repentance and receiving Jesus is the only qualifying marker.

The Lord has in mind for salvation not a select few, but the many. He says himself: ‘And should I not have concern for the great city of Nineveh, in which there are more than a hundred and twenty thousand people?’ (v. 11). He doesn’t even have in mind only those who have been studying the Scriptures for years and years – he describes the Ninevites as those ‘who cannot tell their right hand from their left’ (v. 11). By this he means they are young in the faith – their knowledge of him is little – yet we can be sure that they will grow in the faith as the come to know him more and more. The Lord’s salvation is gloriously and wonderfully offered to all those who will receive him.

Question: Like Jonah, can you think of anyone who you wouldn’t want to see saved? What do you think the Lord’s attitude towards that is?