1 In the past God spoke to our ancestors through the prophets at many times and in various ways,  2 but in these last days he has spoken to us by his Son, whom he appointed heir of all things, and through whom also he made the universe.  3 The Son is the radiance of God’s glory and the exact representation of his being, sustaining all things by his powerful word. After he had provided purification for sins, he sat down at the right hand of the Majesty in heaven. 4 So he became as much superior to the angels as the name he has inherited is superior to theirs.

The Son superior to angels

5 For to which of the angels did God ever say,

6 And again, when God brings his firstborn into the world, he says,

7 In speaking of the angels he says,

‘He makes his angels spirits,
and his servants flames of fire.’ [Psalm 104:4]

8 But about the Son he says,

‘Your throne, O God, will last for ever and ever;
a sceptre of justice will be the sceptre of your kingdom.
9 You have loved righteousness and hated wickedness;
therefore God, your God, has set you above your companions
by anointing you with the oil of joy.’ [Psalm 45:6,7]

‘In the beginning, Lord, you laid the foundations of the earth,
and the heavens are the work of your hands.
11 They will perish, but you remain;
they will all wear out like a garment.
12 You will roll them up like a robe;
like a garment they will be changed.
But you remain the same,
and your years will never end.’ [Psalm 102:25-27]

13 To which of the angels did God ever say,

‘Sit at my right hand
until I make your enemies
a footstool for your feet’? [Psalm 110:1]

14 Are not all angels ministering spirits sent to serve those who will inherit salvation?

THE RADIANCE OF GOD’S GLORY

Who is Jesus? His appearance on earth in human flesh shouldn’t fool us into thinking he is anything less than the Son of God himself! He is ‘the radiance of God’s glory and the exact representation of his being, sustaining all things by his powerful word’ (v. 3). He is the exact representation of the being of his Father – truly and fully God. This chapter is reminiscent of Colossians 1:15-23 where we read that Jesus is ‘the image of the invisible God’. 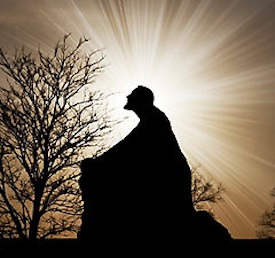 And if we were ever tempted to conclude that Jesus is a great man – perhaps even angelic in stature, but not God, then we are firmly reminded here that Jesus is truly the Son of God. We are shown from the Old Testament that Jesus is far greater than an angel – he is God the Eternal Son. We are given a masterclass of Old Testament Bible study – showing us that Jesus isn’t a late addition to the story – but that he is and has been at the very centre of the story from the very beginning.

From Jesus’ ministry in the first century AD right the way through to the present time there have been those who reject Jesus’ claim to Lordship over all creation. This is a challenge we are faced with daily. Aggressive secularisation and the rise of the humanist movement in the UK, amongst other things, constantly seek to challenge Jesus’ central role in the universe. But we are called to proclaim just the opposite – we are called to proclaim the radiance of God’s glory found in Jesus – through our words, our actions, our relationships and our day-to-day lives.

Question: Do you ever feel challenged as to the identity of Jesus? How do you deal with those challenges?