29 The next day John saw Jesus coming towards him and said, ‘Look, the Lamb of God, who takes away the sin of the world! 30 This is the one I meant when I said, “A man who comes after me has surpassed me because he was before me.” 31 I myself did not know him, but the reason I came baptising with water was that he might be revealed to Israel.’

John the Baptist, sees Jesus for the first time, and what does he say? ‘Look, the Lamb of God, who takes away the sin of the world!’ (v. 29). ‘What a strange thing to say’, we might think. But John the Baptist knows just who Jesus is – and Jesus’ title of ‘Lamb of God’ is especially relevant to you and I – to the whole world. 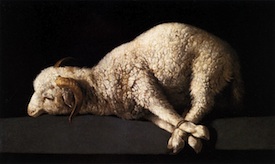 Right back in Genesis 22 a lamb provided by the LORD was anticipated by Abraham – but that lamb was not provided at that time – instead a ram was provided. We are told in Genesis 22:14 that the place where the lamb was to be provided was named ‘The Lord Will Provide’ and people would say about that place, ‘On the mountain of the Lord it will be provided.’

God’s people were waiting for the lamb to be provided – the lamb promised right back in Genesis 22 – and here, John the Baptist announces his arrival.

Jesus is the Lamb for whom John the Baptist and his people had been waiting for centuries. And now here he is – the perfect sacrifice – dying on the Cross as a sin offering so that you and I can be cleansed of our guilt. Jesus, the Lamb led to the slaughter, did so for us.

Question: Many people do not like the idea that sin is a reality. How do you feel about sin? How does it make you feel that no matter what you have done, if you receive Jesus, it is ‘taken away’ by him, the Lamb of God.