13 When it was almost time for the Jewish Passover, Jesus went up to Jerusalem. 14 In the temple courts he found people selling cattle, sheep and doves, and others sitting at tables exchanging money. 15 So he made a whip out of cords, and drove all from the temple courts, both sheep and cattle; he scattered the coins of the money-changers and overturned their tables. 16 To those who sold doves he said, ‘Get these out of here! Stop turning my Father’s house into a market!’ 17 His disciples remembered that it is written: ‘Zeal for your house will consume me.’ [Psalm 69:9]

18 The Jews then responded to him, ‘What sign can you show us to prove your authority to do all this?’

19 Jesus answered them, ‘Destroy this temple, and I will raise it again in three days.’

20 They replied, ‘It has taken forty-six years to build this temple, and you are going to raise it in three days?’ 21 But the temple he had spoken of was his body. 22 After he was raised from the dead, his disciples recalled what he had said. Then they believed the Scripture and the words that Jesus had spoken.

23 Now while he was in Jerusalem at the Passover Festival, many people saw the signs he was performing and believed in his name. 24 But Jesus would not entrust himself to them, for he knew all people. 25 He did not need any testimony about mankind, for he knew what was in each person.

What an outrageous sight it must have been for those Jews in the temple – Jesus wielding a whip and driving cattle, sheep, doves and people out of the temple courts and overturning the tables of the money-changers! Jesus was unhappy about what the temple courts had become – the focus had been skewed towards money and trade. Jesus clearly cares deeply about what what goes on in our places of worship – that’s why the disciples remembered Psalm 69:9, ‘Zeal for your house will consume me,’ which is prophetic of Jesus. It matters because what goes on there and the focus we put on different things reveals so much about the heart of that worshipping community. What takes centre stage? Is it God or cakes? Jesus or tea parties? It’s an important question. 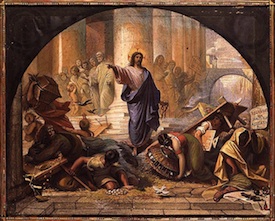 So the Jews ask Jesus to show them a sign to prove he has authority to do these things (v. 18). And what is the sign Jesus offers? He offers the crucifixion and resurrection – his destruction and rebuilding (v. 19) – the ultimate sign of who he is and the power of God. What better sign is there to show Jesus’ authority? Of course, this wasn’t understood by the Jews who were questioning him – their hearts were too far from God to comprehend – we have already seen that by the way they were using the temple.

This leads us to ask one question and take one assurance. The question is: What is the focus in my church? Is Jesus at the centre of our activities or do we have lots of other focuses? The assurance is: When we look at the Cross we see all authority displayed. The Cross is a visible demonstration of why Jesus’ rightful place it at the centre of all our church activities and everything that happens in our church buildings.

Question: What is the main focus in your church? Is Jesus at the centre? When you look at the Cross do you see Jesus’ authority?