The healing at the pool

1 Some time later, Jesus went up to Jerusalem for one of the Jewish festivals. 2 Now there is in Jerusalem near the Sheep Gate a pool, which in Aramaic is called Bethesda and which is surrounded by five covered colonnades. 3 Here a great number of disabled people used to lie – the blind, the lame, the paralysed. 5 One who was there had been an invalid for thirty-eight years. 6 When Jesus saw him lying there and learned that he had been in this condition for a long time, he asked him, ‘Do you want to get well?’

7 ‘Sir,’ the invalid replied, ‘I have no one to help me into the pool when the water is stirred. While I am trying to get in, someone else goes down ahead of me.’

8 Then Jesus said to him, ‘Get up! Pick up your mat and walk.’ 9 At once the man was cured; he picked up his mat and walked.

The day on which this took place was a Sabbath, 10 and so the Jewish leaders said to the man who had been healed, ‘It is the Sabbath; the law forbids you to carry your mat.’

12 So they asked him, ‘Who is this fellow who told you to pick it up and walk?’

13 The man who was healed had no idea who it was, for Jesus had slipped away into the crowd that was there.

14 Later Jesus found him at the temple and said to him, ‘See, you are well again. Stop sinning or something worse may happen to you.’ 15 The man went away and told the Jewish leaders that it was Jesus who had made him well.

Here we join Jesus as he is in Jerusalem at a pool called Bethesda. The first thing to note is that Bethesda means ‘house of mercy’. This is an appropriate name, as we are just about to witness the mercy of Jesus displayed. 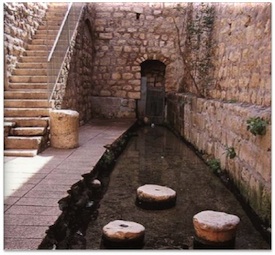 There was an invalid who was unable to walk. He had come to the pool because of its healing properties – he could see that he was sick – he had the will to be healed – but it just wasn’t happening. He said to Jesus: ‘I have no one to help me into the pool when the water is stirred. While I am trying to get in, someone else goes down ahead of me’ (v. 7). The man, who was afflicted so severely that he could not walk, was unable to lower himself into the pool to be healed. The man was unable to be healed by his own strength and striving. Jesus sees the man’s desire and he sees his predicament – in one breath Jesus utters the words: ‘Get up! Pick up your mat and walk’ (v. 8) – and it was so! The man was cured!

There is a great lesson for us all here. We are all like the invalid – we are severely afflicted by sin and although we may desire healing from our sinful nature, we are simply unable to heal ourselves – there is no way we can, by our own strength, lower ourselves into that pool to be cleansed. No, it is only by the mercy of Jesus that we are able to be healed – our souls cleansed and awakened. If we come to Jesus with the desire to received his healing – a new heart and a new mind – he will say to us “Pick up your mat and walk.” And if Jesus says that to us – if we receive his mercy – we will received healing indeed – not by our own strength and striving, but simply by the grace and mercy of Jesus.

Question: Being a ‘good person’ is a common way that people attempt to cleanse themselves or ‘lower themselves into the pool’. Can you think of any reasons why we can’t achieve spiritual healing in this way? Where do you think we might receive healing?

There was an error retrieving images from Instagram. An attempt will be remade in a few minutes.