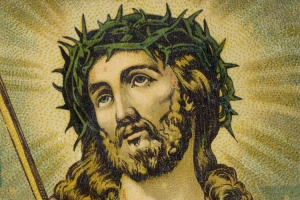 Is this the most fought-over question of all time? I suspect it may well be. And rightly so! Because the answer to this question has the potential to blow our lives wide open. Where have we come from? Where are we going? Why are we here? What’s the point in life? Is this all an accident? What happens when I die? And so on… If Jesus is who he says he is, then the answers to all these questions are found in him.

Matthew, Mark and Luke all start with the genealogy and birth of Jesus as a human baby. A wonderful place to start. Our Emmanuel (God with us).

But we will start where John starts.

In the beginning was the Word…

‘In the beginning…’ Those famous words that introduce us to the world and life of God right back in Genesis 1:1 are explained to us by John:

Have you ever wondered where Jesus came from? Sometimes there can be some confusion. In the beginning was ‘GOD’ – and then one quiet night in Bethlehem Jesus arrived and also claimed to be God, but at the same time he was claiming that God was his Father! Ever been confused about that? Well John wants to help us!

The Son of God

But Jesus wasn’t only there in the beginning… he was there before the beginning, in eternity past. Have you ever wondered what God was doing before creation? Jesus tells us in John 17:

Father… you loved me before the creation of the world.

So what was there before creation? Before there were atoms or protons? A Father loving his Son. And the way the Father loves his Son is through the Holy Spirit (see Jesus’ baptism: Matthew 3:13-17).

‘Ah!’ I hear you say! ‘But now we’re talking about that rather strange thing called the Trinity – aren’t we just complicating things?’ Glen helps us out with that in the 1 minute video:

So, far from needing to feel exasperated by the ‘mystery’ of the Trinity, we have much reason to be overjoyed by the ‘revelation’ of who God is: Father, Son and Holy Spirit. We have reason to be joyful, as Glen says, because the Trinity is the good news that God is Love. And that is exactly why Jesus reveals to us that before creation he was being loved by his Father.

Now, because of what happened in the Garden of Eden, when Adam & Eve turned away from God and decided they wanted to be the masters of their own destiny, we, as their descendants, inherit the consequences of that. A messy life where pain, suffering and broken relationships are common place – and of course death, which is just inescapable. Because we are born into Adam’s family, we are cut off from the life that flows from the heart of God, physically and spiritually.

But what Jesus wants is for us to join his family.

Ever wondered why Jesus died on the Cross? What’s that all about? Well this is why: because he wants YOU to join his family. When Jesus goes to the Cross and is crucified in the most horrid circumstances, he pays a sacrificial price – he pays the price of our sins. That is what we remember on Easter Friday. But as we well know, that is not the end, because on the Sunday morn Jesus is raised from the dead, to new life.

It is that new life that is offered to us when we join Jesus’ family.

11 He came to that which was his own, but his own did not receive him. 12 Yet to all who did receive him, to those who believed in his name, he gave the right to become children of God – 13 children born not of natural descent, nor of human decision or a husband’s will, but born of God.

Jesus invites us to join his family, and in doing so, he gives us the right to call his Father our Father. When we receive Jesus we are united to him and share in everything that is his: His relationship with his Father, His righteousness, His death, His resurrection, His eternal life.

Jesus’ offer to every man, woman and child is very simple: ‘Come and join me in my family’.